“The Belt and Road Initiative”

The promotion on Opportunities and Challenges of “The Belt and Road Initiative” Emerging Market, as well as Qatar Made in China Exhibition 2016 and China-South Africa Trade and Exhibition Center

The latest ranking list of the richest country and region across the world released by the American magazine, Global Finance, showed that Qatar had already become the richest country in the world. Thanks to its unique geographical advantage, Qatar, as the transportation junction of Afro-Eurasia, enjoyed the rapid economic growth in the past 10 years, making it the fastest growing economy in the world. Since the successful application for hosting 2022 World Cup and 2019 World Championship, there has been a soaring market demand in domestic infrastructure of Qatar. Besides feeling unexpected, people all over the world could find the hidden great business opportunities. The Qatari government of increased investment on infrastructure construction, including new urban construction, old city reconstruction, subway, railway, highway, bridge, wharf, stadium and hotel. In the next four years, the market space for infrastructure construction of $ 205 billion would be huge, which would no doubt bring great demand for importing and exporting building materials, engineering machinery, hotel furniture and sports goods from Chinese enterprises. While there is mutual political trust and economic exchange between China and Qatar. In recent years, the cooperating processes are accelerated between the two countries, which promote the trade between the two countries and neighboring countries.

The Qatar Made in China Exhibition 2016 is jointly sponsored by China International Center for Economic and Technical Exchanges of the Ministry of Commerce and Qatar Chamber of Commerce and Industry, it intensively and comprehensively exhibits the middle and high-end Chinese-made products in the fields of architecture and technology and solutions to all countries in the Middle East and Africa, as well as the B2B & B2G trading platform. It is more of providing the best platform for Chinese enterprises and Qatar procurement.

Mr. Wu Shaokang, the famous Chinese entrepreneurs in South Africa, who has put forward a brand new concept of exhibition models, which is “short-term exhibition + long-term product presentation + online promotion”. In the midst of a global economic slowdown and traditional export market weakness, with the premise that the European market economy has not yet shown its recovery, the adoption of brand new trade fair concept by the Mid-South Trade and Exhibition Centre of South Africa, which is located in African bridgehead, not only contributes to make up for the deficiencies of traditional trade fairs, but also helps possible customers to locate the productions and manufacturers anytime and everywhere, in addition, samples can be seen at top speed in the local of South Africa. Meanwhile, it addresses the requirements of different products in different exhibitions for customers from South Africa. For participating manufacturers, the typical character is that they can focus on trade, negotiation and development of new customers, there are no worries about sample presentation, sample delivery, custom clearance & taxes, sample introduction and attracting new customers.

The Mid-South Trade and Exhibition Centre (hereinafter referred to as the Centre) has full autonomy, in terms of short-term exhibition, the Centre will follow the pattern of global exhibitions, however, it will leverage the local channel to attract precision customers to come to visit in the aspects of propagandizing. After the short-term exhibition, the productions will be placed in the exhibition hall for long-term displays, the Centre will invest promotional costs in the long run, in order to build the brands of long-term product center. Besides, the internet platform of the Centre will present the productions of manufacturers online, makes it possible to achieve online to offline display, and provide advice to manufacturers on market dynamics, etc.

Then, Mr. Tian Guofeng, the Director of exhibition department of China International Center for Economic and Technical Exchanges,and Mr. Wu Shaokang, the Chinese leader in South Africa explaining the South Africa market, along with Mrs. Shi Chunping, the general manager of Foshan Haohan company, separately gave an explanation of Qatar, the South Africa market and introductions of special funds for minor enterprises to explore international market, and invited guests to share their successful cases of exploring international market. Both the promotion meetings had gained the supports of friends from all walks of life, reactions to the meetings were positive and many enterprises have signed a tentative contract for cooperation on the site.

2014-06-24
shakeel@qcci.org
Share
Previous The Beijing Briefing of Qatar Made in China Exhibition 2016 was held in Beijing.
Next Building a bridge with the world, highlighting the charm of Made in China! 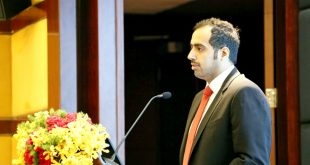